Author took long path to get to ‘Heaven’ 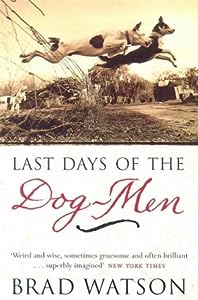 Cover of The Last Days of the Dog-men

During a recent telephone interview, Watson spoke about his background, influences and literary aspirations. Though he is now writer-in-residence at the University of West Florida, Watson revealed that his path to the writing life was anything but direct. Born and raised in Meridian, Miss., he “was not a serious student.” What he really wanted to do was act, and as a teen-ager he traveled to California to chase his dream. After some time on the West coast, he returned to his native Mississippi and enrolled in college. He credits an early teacher, Buck Thomas at Meridian Junior College, with turning him into “a serious reader.” Matured by his California experience and guided by Thomas, Watson plowed through the works of William Faulkner, Eudora Welty and Robert Penn Warren. Watson said that the “poetic language” of these Southern literary titans “blew me away.”

He went on to take an MFA at the University of Alabama, but creative writing proved draining. Describing himself at that time as “a little burned out on my fiction writing,” Watson became a reporter on the Alabama Gulf coast, working as a stringer for the Montgomery Advertiser and several local papers, including the Foley Independent and The Islander in Gulf Shores. Watson said that reporting “opened my brain up” after so many years in school. Furthermore, he was fascinated and intrigued by Baldwin County’s lush environment and rich history.

Rested and equipped with an enlarged perspective, Watson returned to literature during the 1990s with an acclaimed collection of short stories, “Last Days of the Dog Men” (1996), and teaching gigs at Harvard and the University of Alabama. He also began work on “The Heaven of Mercury,” which he envisioned as “a simple comedy.” But progress was slow. “I kept running into walls,” Watson said. He averaged about 100 pages a year but “could not see the whole book.” As he revised and reworked the text, Watson gradually started “writing towards the voice” and the story began to take shape.

Watson drew on his own family for some of his characters, especially Birdie, who is loosely based on his grandmother. “This is a story about people who undergo a lot of hard times,” he said, “but are not hopeless.” And, just as in life, none of these characters is perfect. Watson described them as “survivors, people who, like real human beings, make a lot of mistakes … but at the core are decent.” This, he stated, is his driving motive as a writer, “to examine lives objectively and sympathetically … even ones that seem bad.”

Asked about the book’s beautiful cover, which features a woman wading through crystal clear water, Watson said that his initial reaction was negative. He told his editor, “You need a stronger, grittier image.” But soon it grew on him, he admitted, as “The Heaven of Mercury” is “a novel with a lot of water in it,” and the image also nicely represents the “fluidity of life.” Watson chuckled and said one of his friends scolded him about the dust jacket, “Don’t the New York editors know our rivers aren’t that clear?”

In addition to his post at UWF, Watson is on the faculty at Spaulding University in Kentucky, where he is mentoring Silas House. At present he has two unpublished manuscripts “in the drawer,” a memoir and a short novel, and he is interested in starting another novel, “something different.”

As this story goes to press, “The Heaven of Mercury” has been nominated for a National Book Award.